What I’m about to tell you might change your life. Are you ready? You don’t really have to buy pickles from the store. You can make your own. And I bet they will taste better. Sorry, Mount Olive. 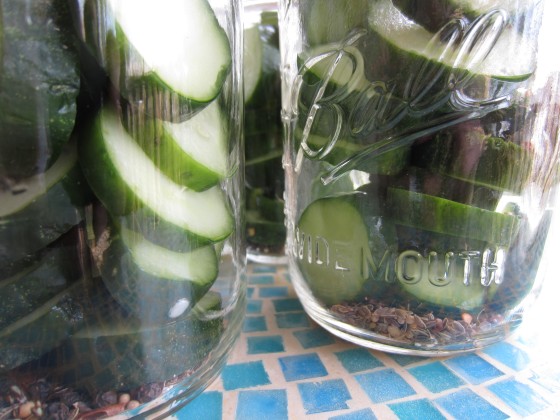 I think I’m a lot like an eighty year old person. This means several things, including my proclivity toward early bedtimes, the fact that I’m always cold, and that I sometimes get very sleepy after one glass of wine. However, some of my old person tendencies are more practical. I know how to knit. And sew things to other things. And I can put food up like a Cold War era housewife. Oh, peaches are in season, you say? I’ll just buy a bushel of them and seal them up in a nice light syrup. Never mind that I can buy a 75 cent can of peaches in light syrup any time of year. I want to be able to crack open a jar of peaches that I peeled, sliced, and packed any time of year. Maybe 2AM on Christmas Eve, because that’s the only time the grocery store isn’t open. That way I’ll feel like I did all that work for a reason.

Aside from being fully prepared for the apocalypse, knowing how to put up food really impresses people who once canned food out of necessity. Jason’s grandmother gave me a bunch of her old canning jars, including this really neat one.

In all seriousness, there’s really something to be said for canning your own food. Other than just looking neat, it’s pretty cool to open a jar of your own diced tomatoes in January. Even cooler if you grew them yourself. Who knows why, but there’s something appealing about working hard for something that you could buy at the store in a few seconds. There’s something poetic about canning food, maybe because it’s something that my great-grandmothers and grandmothers did out of necessity. Plus, I know what’s in it when I make it. I can’t pronounce what’s in a can of peaches in light syrup–other than peaches and light syrup. 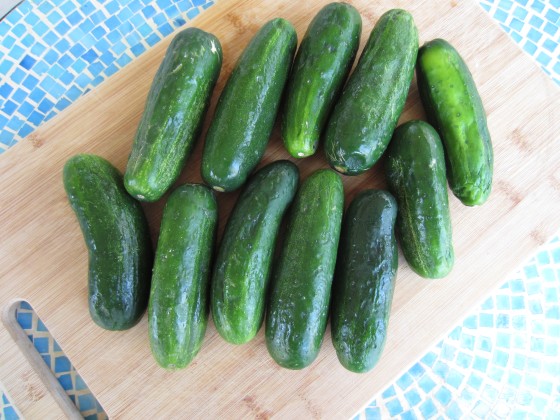 Enough about that. On to the important stuff. Pickles. These are a great basic pickle. Dill, good on sandwiches. Pickling things is a good place to start as an amateur canner. They’re very easy.

First, you’re going to need a bunch of pickling cucumbers. These came from Harris Teeter because I couldn’t wait for mine to grow. They’re still just little sprouts. Anyway, I bought ten of these and ended up with 6 jars of pickles. Be sure to cut off the blossom and stem ends. There are enzymes in them that will make your pickles soggy. No good. Cut ’em off.

Cut the cucumbers into coins. And that’s all for cucumber prep.

Okay, let’s talk jars. And sterilization. First of all: the basics. Jars you can use over and over until they crack. Bands (the part of the lid that you twist) you can also use forever. However, the lid you must replace every time because they only seal once. As for sterilizing, the best way to do this is to simmer your jars, bands, and lids before using them. However, you can also use the dishwasher. Do bear in mind that you cannot touch the inside of the jar or the underside of the lid between the dishwasher and the boiling water canner. It’s up to you if you can handle that kind of risk. Botulism is no joke. Don’t let that scare you away from these pickles, just beware. 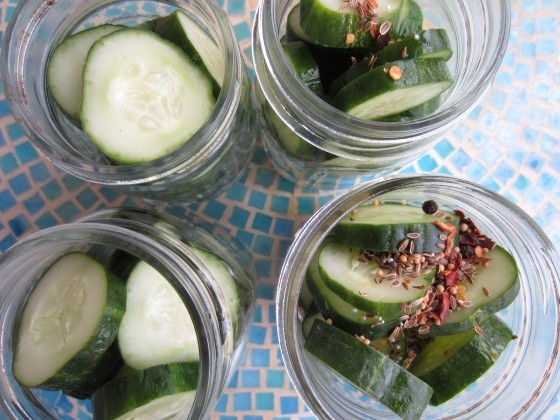 Next, you pack your jars. Make sure that the jars are well-packed, but not stuffed. Avoid damaging the cucumbers. Also, throw in pickling spice and Ball Pickle Crisp. It’s a preservative that keeps things crispy. Not necessary, but extra crispiness insurance never hurt. The pickling spice that I use is just dill seeds, red pepper flakes, whole mustard seed, and whole black peppercorns.

To make the brine, bring water, apple cider vinegar, and pickling salt to a boil in a saucepan. As soon as all the salt is dissolved and the brine has boiled, fill your jars. Leave about a quarter inch of headspace. Place your lids on the jars and screw on the bands. Do not tighten all the way, only loosely.

After processing for 10 minutes, place jars on a dishtowel and don’t mess with them. Just be quiet and wait for the most gratifying sound in the world. The jars will pop as they seal, and that sound will make you jump around in your kitchen. Trust.

After 12 hours, unscrew the bands and pick up the jar by the edges of the lid. If it doesn’t open, you’re good! Store your jars in a cool, dark place. They’ll last for a year, but I always eat these pickles faster than that.

Here is my last piece of advice: there is a lot of steam involved in this process so you’ll want to keep your hair out of your face. May I suggest a brightly colored headband with a large flower on it? 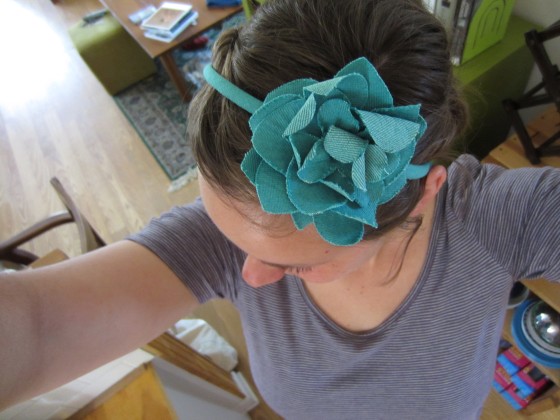 Here is my recipe for Dill Sandwich Slices:

Simmer jars, lids, and bands or run them through the dishwasher to sterilize them.

Remove the stem and blossom ends of your cucumbers and cut them into coins. Combine mustard seeds, peppercorns, dill seeds, and red pepper, then put two teaspoons of the spice blend into each jar. Add about 1/16th-1/8 a teaspoon of Ball Pickle Crisp to each jar. Pack the cucumber coins in.

To make the brine, bring salt, water, and vinegar to a boil. Pour the brine into the jars, leaving about a quarter inch of headspace.

Place lids on top and gently screw on bands. Process jars in a boiling-water canner for ten minutes.

P.S. Read something authoritative about canning before you jump in. I have not covered all the things that you should probably know. I recommend the Ball Blue Book. It’s cheap and has all the answers.