There’s this episode of 30 Rock where Liz Lemon (recently dumped) decides that she’s totally giving up on life. She shows up to work wearing a fanny pack and a mom sweatshirt while carrying a cat named Emily Dickinson. Later in the episode, she opens a can of beenie-weenies and then pours pickles into the can. While pickled beenie-weenies sound decidedly disgusting, I understand the impulse to put pickles on any and everything. I also wholeheartedly love Liz Lemon as if she were a real person. If someone told me that I was just like her, I would act offended but secretly be flattered. Which is one of the reasons that I channel Liz Lemon whenever possible. That means I eat a lot of pickles. 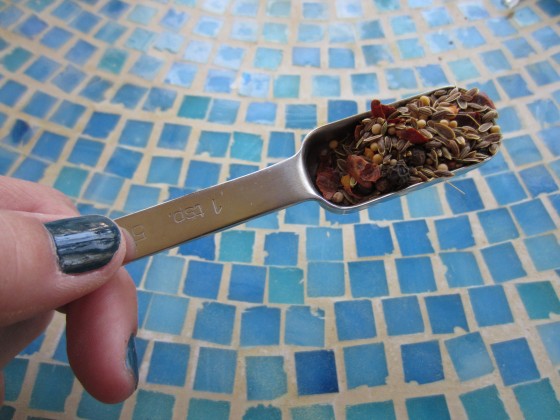 SInce I’m trying to make all my own pickles this year, this requires a large quantity of pickling spice. You can buy it from a health food store, but you sort of have to guess at what all is in it. And if there’s something you don’t like, you can’t really do anything about it. Ball also makes a pickling spice, but I think it’s a little chemical-y tasting. I didn’t realize, but it might be cheaper and easier to make your own. It’s just dill seed, mustard seed, black peppercorns, and crushed red pepper.

Here’s the recipe (if you can call it that):

Yields about a half-pint jar full of pickling spice (will make somewhere between 6 and 12 pints of pickles, depending on spice level)

P.S. This pickling spice can pickle all sorts of other things. Beets, okra, asparagus, green beans, baby onions… and whatever else you can think of.

To close with some wonderful Liz Lemon wisdom, “I’ve got a new life philosophy that I call Lizbeanism. You see, I’m Liz, and my philosophy is simple, like a bean.”

One thought on “Pickling Spices”