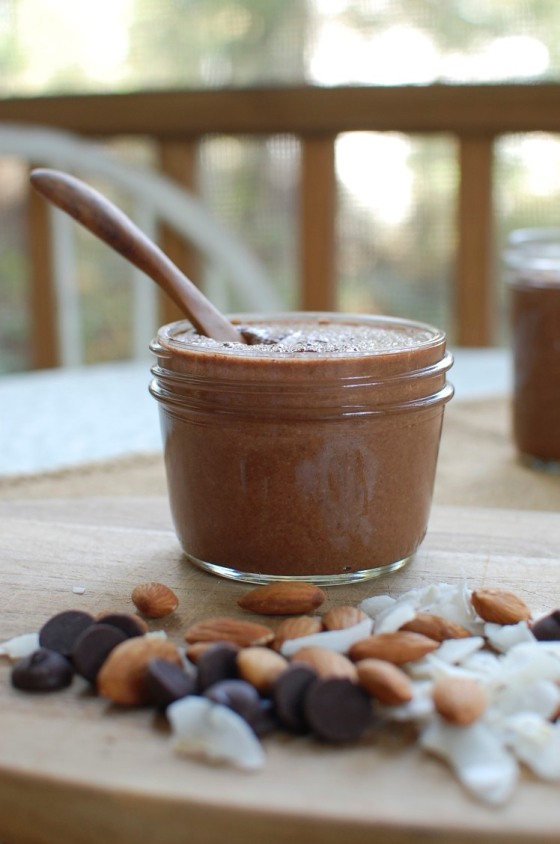 I have a peanut butter problem. I love any kind–from JIF to the fancy all natural kind to the kind that comes in the middle of a resse’s peanut butter cup. I’m not picky. My interest extends into all sorts of nut butters–almond especially. The other day, I thought I’d make some almond butter, and then I considered that some chocolate would be a welcome addition, and when I reached into the cabinet to find the chocolate chips, I saw the coconut. The rest is history!

The thing that really took this idea over the edge is that I toasted the almonds and coconut before I pureed them into almond butter. It made the coconut flavor a little stronger and more pronounced, and that can’t be a bad thing.

Preheat your oven to 300 degrees F.

When the oven is preheated, toast the coconut and almonds for a few minutes, or until the edges of the coconut are browning. (Be careful—I’ve started like three fires in my oven trying to toast coconut.) When everything is done toasting, pour the nuts and coconut into the bowl of a food processor. Process for several minutes until smooth. Add the salt, too.

Using a double boiler (or heatproof bowl over a pot of simmering water), melt the chocolate chips with the coconut oil. Then, pour the melted chocolate into the food processor, too. Mix everything together and pour it into a jar (or two). 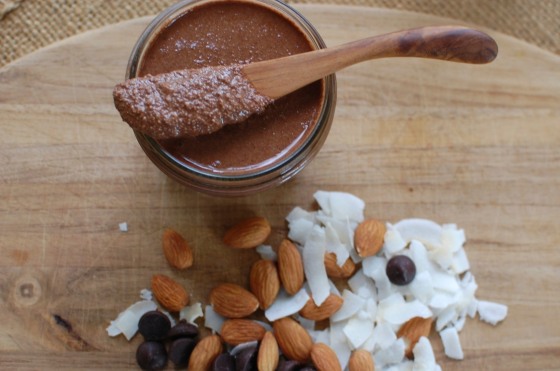 As Thanksgiving quickly approaches, I’m feeling the need to clean out the fridge and freezer and fill them with things that are actually useful. Gone are the frost bitten cubes of mango that I kept trying to make into popsicles this summer, along with the weird sample bottle of coconut flavored rum that I keep pretending I’m ever going to drink. I’ve replaced those things with cranberry sauce, homemade nut butters, frozen pie crusts, breakfast burritos, jars of sweet potato soup, and veggie burgers. I’m perfectly prepared for the fact that there will be days when I need to grab a frozen burrito for breakfast, a jar of frozen soup for lunch, and come home to defrosted veggie burgers for dinner. The good news? Even though eating a full day of meals from the freezer seems like a terrible idea, I’ll actually be getting some vegetables in. 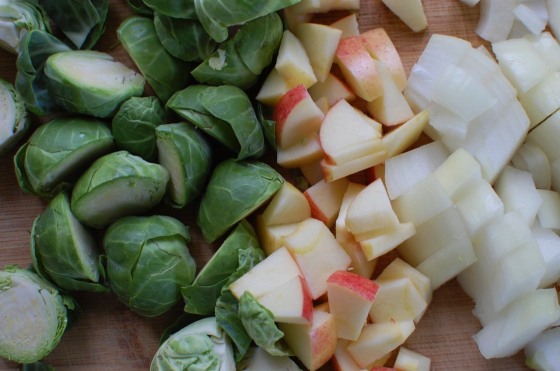 Weirdly, these veggie burgers start with with onion, brussels sprouts, and apples. Later, they’re combined with cooked quinoa, chickpeas, an egg, and some spices, all of which give them a really nice, not too apple-y sweet flavor. It’s the sort of veggie burger that you know is not a real burger, but makes an interesting and delicious substitute.

I have to confess: as a meat eater, a veggie burger really has to be something special. I like veggie burgers that are made with beans and veggies rather than soy and obviously not with mushrooms (ew). I love black bean burgers, but not so much on a bun. I like them best with an egg on top. If I’m going to eat a veggie burger on a bun as if it’s a real burger, it has to be good–and texture has a lot to do with that. All these ingredients are pulsed in a food processor, then shaped into patties and pan fried. They’re soft and warm on the inside, and crispy on the outside. They’re bun-worthy. (Although also delicious with an egg on top for breakfast.)

The most important thing to remember is that you’ll need plenty of cheese, because… well, because everything is better with plenty of cheese. I used havarti with dill and it was just perfect. (Thanks, TJs!)

Adapted from How Sweet It Is

In a skillet, sautée the onion, apple, and brussels sprouts in some olive oil. When everything is soft, pour the balsamic vinegar in and stir to combine. Let sizzle for another couple of minutes.

In the bowl of a food processor, combine the sautéed mixture, chickpeas, cooked quinoa, eggs, and smoked paprika. Pulse until everything is chopped up, but don’t let it get puréed.

Scrape the mixture out into a bowl and fold in the flour to combine. At this point, the mixture will be pretty wet. If you feel like it’s too wet, add a little more flour. When you can, try to scoop some out and form it into a patty. It will be sticky and might not really hold together very well. I actually formed the patties and put them directly into the pan with some hot oil. By the time the bottom is crunchy, you can flip the burgers and let the other side get crisp. When they’re done, they hold together just fine.

Serve on a toasted bun with melted Havarti. If you’re feeling feisty, slice the remaining sprouts thin and toss them with some oil, vinegar, and grainy mustard for a simple slaw.

To freeze the patties, let them cool and then pack them into bags in single layer. Label and freeze for emergency dinners. 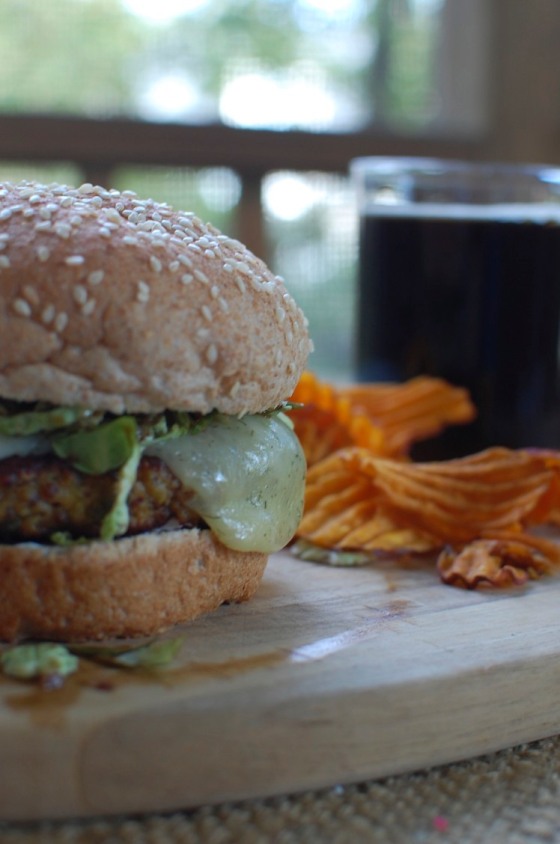